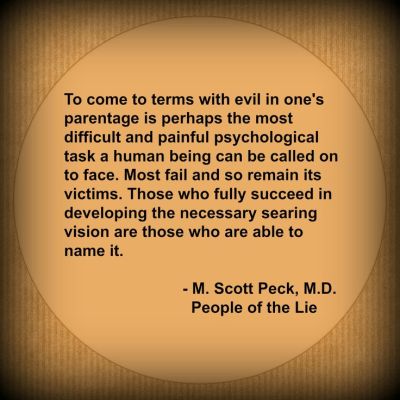 I’ve always had a sense of the supernatural around me. Long before I studied what that means from a Christian perspective and gained all the Christian vocabulary, I saw the forces of light and dark at work in the world, and in my own life. I’ve always had a sensitivity to these forces around me. When I was a child, I was fixated on understanding what “goodness” was. I read a lot of books about good people, and dwelled upon what aspects and qualities made them good. As much as I could, I focused on what the good people were doing, and how they were doing it. Perhaps I did this as a form of self-protection. Because, you see, I was raised by evil people.

Evil is not a word I use lightly. In People of the Lie, Scott Peck describes evil in psychological terms. According to Peck, an evil person:

These traits can also be used to describe those with personality disorders, and while it is highly probable that my family has these disorders, there is also a common thread of supernatural darkness that is woven through all their actions and behaviors.

In my home growing up, evil was not obvious to the untrained eye. In my house, evil looked almost normal. Evil smiled. It had dinner on the table. It went to work and paid the bills. It looked like everyone else on the cul de sac, except for one key aspect. It could not, would not, under any circumstances, admit to wrongdoing of any kind, in any shape, or form.

All people at some time or another, are resistant to admitting their faults. For evil people, it is pathologically impossible. Their failure to do so creates an immense wake of blame, denial, scapegoating, projection, and flat out lies wherever they are. Because they can never be at fault, their innocent victims are the ones left carrying the bag. Multiply this process over the course of a lifetime, and the damage piles up. It’s hard for a normal person to grasp why evil people cannot do this one little thing; admit fault. It causes an immense amount of pain and suffering for all who know and interact with them, and surely their egos are not worth all that pain. To an evil person, it doesn’t matter how many casualties pile up. They will not be changed, because they’ve done no wrong.

The only way to combat evil is through love. An evil person will reject love in any form, so there’s no use directing it there. However, there is a lot that one can do to love others, with the intention to heal the injuries caused by evil. As someone raised by evil people, I am learning more and more how to show myself the love and care I need. The more non-evil people are capable of giving and receiving love to one another, the less an evil person has room to cause harm. Love includes truth, goodness, and beauty. It is growth. It is transparent. It is life-giving. It allows one’s faults to be seen, known, and forgiven. It allows strengths to develop. It means people are allowed to be exactly who they are. It is the full expression of self. It is what it means to be fully alive.